I am a Greek American filmmaker raised and bred in The Bronx, New York.

Went to the University of Pennsylvania to become an Astrophysics scientist… but took film classes and shifted directions to a Visual Communications Bachelor of Arts Degree. After a screening of Tarkovsky’s STALKER this sci-fi film transcended - that was it . . .

Pursed filmmaking with a scholarship at New York University’s Tisch School of the Arts Graduate film program with prominent independent directors as instructors. Obtained a Master of Fine Arts with excellence in film directing. My film work received a Golden Eagle Award, Mobil Foundation Award and a Paramount Pictures grant.

While location scouting in New York for a timeless stone village to shoot a film, discouraged I left for Greece to search. There I obtained funding from the Government's Greek Film Center and shot on a remote barren island.

After that, I decided to stay.

Love New York, but It was like being replanted from a pot into a plot of land. The everyday stimuli streaming in Greece became a crucial element of my creative process. I found my film work to be inspired by the light, the ideology, the life, the color, the timeless structures and the hidden beauty found here. 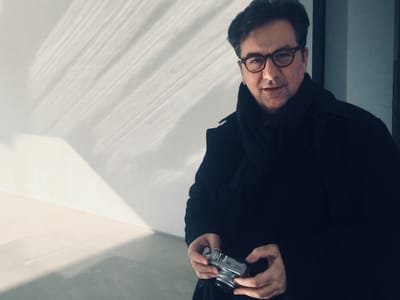